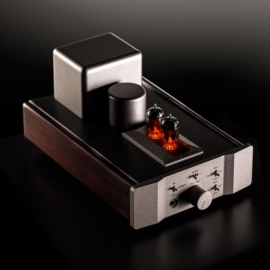 $ 11,999
World-class audio engineer Jim Fosgate is the vision and expertise behind the Fosgate Signature Tube Headphone Amplifier. The Fosgate Signature embodies unique and patented circuit topologies, elevating the headphone listening experience. The genesis of the design started over 2 decades ago. Countless man-hours of working with every possible major circuit approach was not just explored, but designed, built, and auditioned by Jim Fosgate himself. Some initial designs used output transformers, some designs were direct drive with no output transformer. Others prototypes used solid-state circuitry and buffers to obtain low output impedance for driving headphones. Through this painstaking and thorough approach, a headphone amplifier design evolved which satisfied the exacting standards of Jim Fosgate.

The Video Buffers are not Op Amps and have no voltage gain. They offer high impedance inputs so the vacuum tubes are not loaded down, and low output impedance capable of driving most headphones to high volume levels with no audible distortion or colorations. The natural smooth sound of the 12AX7 vacuum tubes pass straight through to the outputs.

The bass boost equalizer circuit is designed to give the headphone listener defined, low frequency bass impact without bass boom. There are three positions on the bass control, Min, Max, and Off. When the control is in the center Off position, the bass boost is bypassed. This circuit has been used in different forms in many products including Rockford Fosgate Car amplifiers. Jim Fosgate received US patent number 3,883,832 for this circuit in 1975. It is called a “SINGLE ELEMENT CONTROLLED TWIN T FILTER” and has a much steeper curve then a bass or loudness control. It changes frequency and amplitude (Boost) with a single control. When the control is set in the Min position, the maximum boost is applied at a lower frequency then when the control is set to the Max position.

All aspects of the circuitry maximize a clean signal path. However, the uniqueness of the circuit does not end here. In order to infuse the sound with a natural sound stage, Jim integrated his surround circuitry design, part of his US patent 5,307,415 “Panorama Control” filed in April 1994. This circuit applies an out of phase cross blend to create a sense of depth and space and moves the dimensional soundstage outside of your head. The control has Min, Max, and Off positions. In the center off position the surround circuit is bypassed so the signal is unaffected and provides normal stereo.

This Headphone Amplifier’s elegant circuit has the tube amplifiers, buffers, bass EQ, and surround processing configured in a single stage. Negative feedback is applied around this stage in a single loop. Output offset is controlled with DC servos, allowing the video buffers to directly drive the headphones with no output capacitors in the signal path. There is only one coupling capacitor per channel in the signal path, and it is enclosed within the feedback loop, thus capacitor colorations are eliminated. Distortion and noise are below the threshold of hearing. The bandwidth is very wide allowing audio signals to pass through without colorations. Bandwidth is an amazing “ten times” the threshold of human hearing, 2 HZ to 200KHZ at -3DB.

The power supply is similar to the one used in the Fosgate Signature Phono Preamplifier. It uses separate oversize storage capacitors on each amplification path of each channel to provide a rock solid supply voltage without voltage regulators to affect the signal. The circuit is configured so that audio signals from the one channel cannot couple to the other, preserving soundstage width and depth. This power supply provides the benefits of dual mono and batteries in a simple AC powered circuit.

A 35 second muting circuit eliminates turn on/off thumps from the direct coupled output circuit, and there are two stereo inputs and a stereo tape output are provided for added flexibility. Industrial design by Fred Hulen incorporates the hallmarks of the Fosgate Signature line including classic, open tube design and real wood side panels.
加到购物车
Items 1 to 1 of 1 total